Birchfield Residents Action Group was awarded two awards at this year’s It’s Your Neighbourhood Awards – a Special Merit Award and also a Level 4 – Thriving Award. The awards were presented at an event at the Assembly Rooms in Ludlow, Shropshire on Tuesday 20th September organised by RHS Heart of England In Bloom. The awards were collected by Barbara Petris, Lurlyn Salmon and Michelle on behalf of Livingstone Road Community Allotments. They are the culmination of the many efforts made by BRAG, local residents and other partners over the past year to encourage people to take more pride in the local environment. Well done all involved! 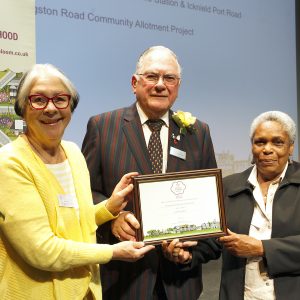